Ju Jitsu has its roots traced back to the Japanese Samurai, who, if he lost his weapon in combat would then resort to the unarmed self defence techniques we learn today (although much more updated to deal with todays society).

Weapons are practiced entirely in kata form both individually and in pairs. The stances and posture used for weapons brings benefits to the unarmed self defence as it leads to improve power and control as well as imparting muscle memory.

The student is expected to perform specific kata's for each weapon and after attending the minimum number of Ko Budo's they are accessed and having met the required standard will earn that Ko Budo level. Progressing through the Dan Grades is only possible once the student has achieved the correct Ko Budo level (see table below). 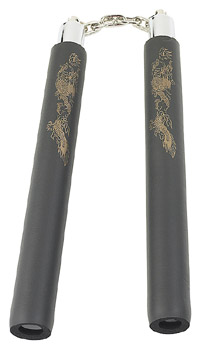 Nunchaku are two sticks approximately 12 inches long attached by a piece of chain or rope.

Perhaps the most well known of all Okinawan weapons, the nunchaku are feared for their high speed and deadly effect. Originally used to pound wheat into flour, crush rice, pull roots and guide a horse as the bit, the nunchaku were, like countless other farming implements, used against the Imperial Japanese invaders.

The prime use of the nunchaku apart from strikes is as a weapon for wrapping, the chain or rope allows for intercepting a strike, wrapping it and trapping. 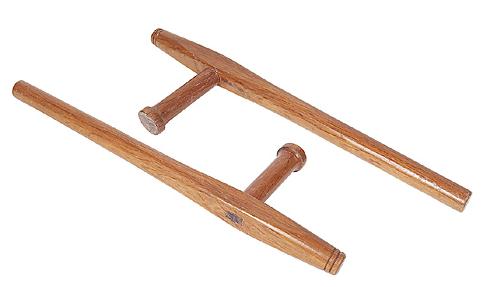 The people of Okinawa were forbidden to own or carry weapons like swords by the Japanese invaders and had to find weapons made from everyday items.

The tonfa was originally a wooden handle that fitted into a hole on the side of a millstone used to grind rice and other grains, dating back to 15th century Okinawa. The handle, which was easily disengaged from the millstone, became a very effective weapon of defence.

The Tonfa's circular movements as a farm implement evolved into its rotating strikes as a dangerous weapon. It can be used to block or parry another weapon and can also be spun in a circular motion to thrust or strike attack. Good body movement can make this weapon formidable.

No other weapon short of a sword can penetrate your blocks when you correctly use the tonfa to reinforce them. A nunchaku, knife, bat, or bo will bounce off the strong tonfa. When the tonfa is held down the forearm, the arm is reinforced with two inches of rock-hard wood. Two tonfa's were often used simultaneously, and were very efficient against armed assailants. The side of the tonfa was used for blocking, and the ends for direct punches. Continued practice with the tonfa can help improve balance, coordination and physical strength.

The sai is a weapon found predominantly in Okinawa. Sai are often believed to have originated as an agricultural tool used to measure stalks, plough fields, plant rice, or to hold cart wheels in place, though the evidence for this is limited. Its basic form is that of an unsharpened dagger, with two long, unsharpened projections (tsuba) attached to the handle. The very end of the handle is called the knuckle.

The sai's utility as a weapon is reflected in its distinctive shape. With skill, it can be used effectively against a long sword by trapping the sword's blade in the sai's tsuba. It has been alleged that skilled users were able to snap a caught blade with a twist of the hand. There are several different ways of wielding the sai in the hands, which give it the versatility to be used both lethally and non-lethally.

Traditionally, sai were carried in threes, two at the side, as primary weapons, and a third tucked behind, in case one was disarmed or to pin an enemy's foot to the sandy Okinawan ground. As a thrown weapon, the sai have a lethal range of about 20-30 feet. Throwing the sai was typically used against an opponent with a sword, bo or other long range weapon. The heavy iron sai concentrate enough force to punch through armour.

One way to hold it is by gripping the handle with all of your fingers and hooking your thumbs into the area between the tsuba and the main shaft. This allows you to change effortlessly between the long projection and the back, blunt side. The change is made by putting pressure on your thumbs and rotating the sai around until it is facing backwards and your index finger is aligned with the handle. The sai is generally easier to handle in this position. The knuckle end is good for concentrating the force of a punch and the long shaft can be wielded to thrust at enemies, to serve as a protection for a blow to the forearm or to stab as one would use a common dagger.

Katana is the word for "sword" in the Japanese language. It is also used specifically for a type of Japanese backsword or longsword in use after the 1400s, a curved, single-edged sword traditionally used by the samurai.

The katana was typically paired with the wakizashi or shoto, a similarly made but shorter sword, both worn by the members of the warrior class. It could also be worn with the tanto, an even smaller similarly shaped blade. The two weapons together were called the daisho, and represented the social power and personal honour of the samurai. The long blade was used for open combat, while the shorter blade was considered a side arm, more suited for stabbing, close quarters combat and seppuku, a form of ritual suicide.

The katana was primarily used for cutting, and intended for use with a two-handed grip. It is traditionally worn edge up.

A bokken is a wooden Japanese sword, usually the size and shape of a katana, but can be made to replicate any type of sword. It is used as a training sword, as a relatively safe and inexpensive substitute for a real blade. 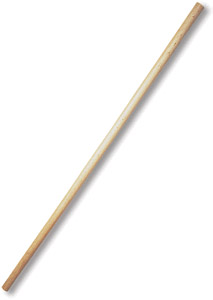 The bo is a Wooden staff approximately 6 foot long. The basic purpose of the bo is increasing the force delivered in a strike, through leverage and to benefit from the extra distance this weapon affords. The user's relatively slight motion, effected at the point of handling the bo, results in a faster, more forceful motion by the tip of the bo against the object or subject of the blow thus enabling long-range crushing and sweeping strikes. The bo may also be thrust at an opponent, allowing one to hit from a distance. It also is used for joint-locks, thrustings of the bo that immobilize a target joint, which are used to non-fatally subdue an opponent. The bo is a weapon mainly used for self-defence, and can be used to execute several blocks and parries.

The bo staff is originally thought to have been used to balance buckets or baskets. Typically, one would carry baskets of harvested crops or buckets of water or milk or fish, one at each end of the bo, that is balanced across the middle of the back at the shoulder blades. The word "bo" is merely the Japanese word for wooden staff weapons and the art of wielding the bo is bojutsu.

A jo is a long wooden staff approximately 4 foot long. The martial art of wielding the jo is called jojutsu or jodo. The jo staff is shorter than the bo. 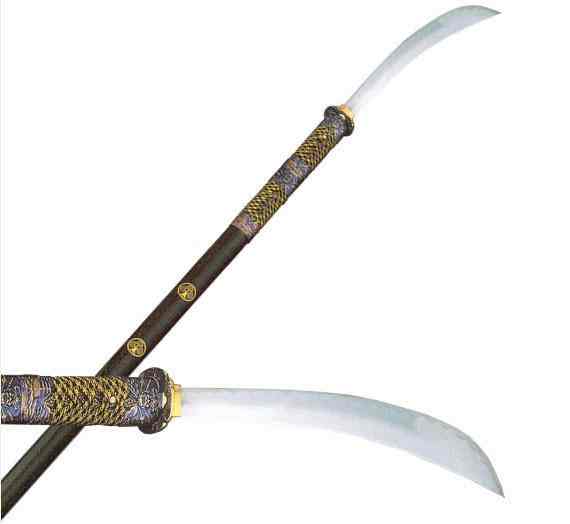 The naginata is a weapon that was used extensively in feudal Japan. Described by some as simply "a sword on the end of a long pole", the naginata was actually a sophisticated weapon which required considerable skill and stamina to use effectively in battle. It consisted of a curved blade, 1 to 2 feet in length, mounted onto an oak shaft that was usually 5 to 9 feet long. Attached to the butt end of the shaft was a sharp end-cap, or ishizuki, which was used to pierce between the plates of an attacker's armour.

Although the exact origin of the naginata is not known, one theory states that the naginata evolved from a simple farming tool used for chopping. In the early part of the third century BC, farmers attached sharp stones to the end of long wooden shafts. Later, metal was used in place of the stones.

Despite the uncertainty surrounding its origin, it is a well-known fact that the naginata was being fully utilized in battle by the 10th century. Cavalry battles had become more important by this time, and it was difficult to repel mounted warriors simply by means of the bow, arrow, and sword. The naginata proved to be a superb weapon for close-up fighting; it's sweeping arcs of destruction were used to cut a horse's legs and kill its rider once the horse fell to the ground. Off the battlefield, the naginata was also used by women as a means of protecting themselves and their children while the men were away in battle or working in the fields. Because of the size and reach of the weapon, a woman could keep an attacker at a safe distance. 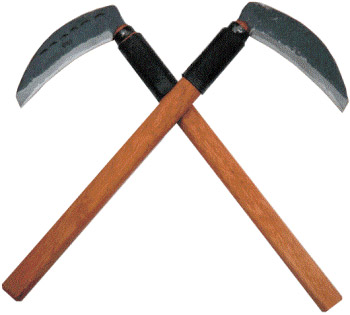 Kama are Okinawan and Chinese weapons that resemble traditional farming devices similar to a sickle. It was originally a farming impliment, used for reaping crops. During the Japanese invasion of Okinawa, all traditional weapons were outlawed. This led to the development of the kama and other Kobudo weapons.

The kama traditionally consists of an inwardly curved blade mounted perpendicularly on the end of a wooden handle, although metal variants are not unheard of. The handle itself is typically the same length as its user's forearm. It is a slashing and stabbing weapon that is effective for melee combat. The curved blade make it effective as deflecting an opponent's weapon. Additionally, because of its relatively short length, it can be quickly manoeuvred in many ways that longer weapons, such as the katana and bo cannot.

Ko Budo simply means weapon training. These classes allow students under instruction to learn the variety of weapons used. Students can attend Ko Budo's from Blue Belt, though they can start at a lower grade within class. A student must attend a minimum amount of Ko budo to be assessed (see table above).

Juniors are taught weapons from Brown Belt 3rd Tag or 14 years old, although for safety they are not allowed to use metal weapons.