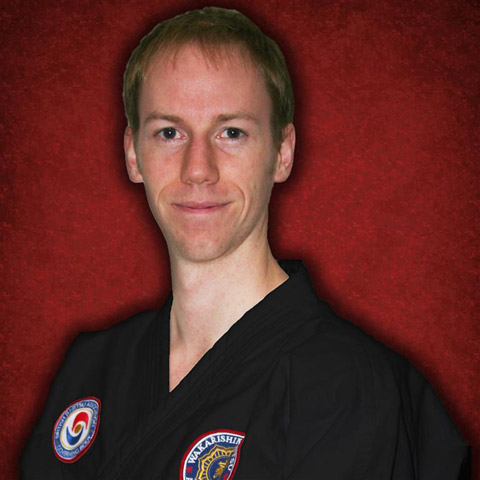 I mostly train at the Chelmsford clubs on Tuesday with Sensei Ian and Sunday with Sensei Dave. I occasionally pop up at random clubs to confuse people.

I first started in 1998 while at school, but then went away to university and then work for 7 years. Once I moved back into the area I started again pretty much where I left off. It's just like riding a bike!

It's incredibly broad, and I think that's its greatest strength. Whereas some arts will teach you how to kick, or how to throw, or how to wrestle, jujitsu takes all of that and a little more. It doesn't over-specialise to the point of weakness, and it's impossible to get bored with it.

I played quite a bit of badminton as a kid, but I was never much of a sportsman.

It was all a bit of a blur, to be honest! I started a week after another beginner, so we naturally ended up working with each other and trained through to green belt together. I remember being struck by how friendly and unintimidating the atmosphere was, and that's just as true today as it was then.

I think it's always at the back of your mind, but for me it felt like a distant dream until I was literally waiting to go into my brown belt grading, when it suddenly seemed very close. Which was unfortunate as I had plenty of other things on my mind at the time!

Yes. It wouldn't be worth anything if it was easy.

It shows that the owner has had the determination to see a long, hard and demanding task through to the end. It also means that you've covered the basics to a good standard, and now you have a chance to experiment. Once you're there you can afford to take a little time to learn some random kata you like the look of, practice more for competitions, maybe look into getting your coaching qualifications. It's very much a beginning rather than an ultimate destination.

Never, thankfully. The martial arts skills you don't realise you're learning help keep you out of trouble - situational awareness, posture, confidence and respect for your opponent.

I shied away from competitions for a long time, but I've started to really enjoy them in recent years and now regret leaving it so long before having a proper go. So I'd thoroughly recommend giving it a try early in your jujitsu career even if you're not naturally competitive - you might just surprise yourself!

Absolutely positive. I've made good friends, increased my fitness and learned something which could one day save my life. Negative impacts? I once spilled choji oil on the carpet when cleaning my katana.

You only have to look at the differences in size, shape, age and gender among the Wakarishin family to see how it can be made to work for everyone. And it's so varied that you can always find ways of keeping your training fresh and interesting. Between techniques, kata, sparring, ground-fighting, weapons work, syllabus revision and just playing with new ideas it's impossible to walk out onto the mat and not be able to think of something to do, whatever mood you're in.

I put in about 4-5 hours a week, not including gradings, courses and competitions. But start with a single session and see if the jujitsu bug bites you!

Grab a friend and come give it a go. The first step on to the mat is the hardest.