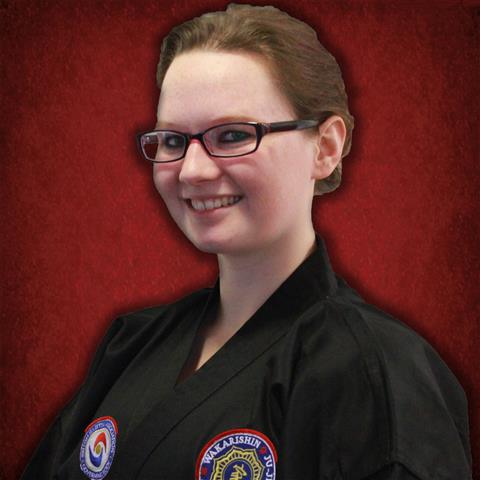 I train at Harold Hill on Mondays and also at Basildon on Wednesdays.

My younger sibling had started, which eventually got me hooked and an added dose of old fashioned sibling rivalry helped. But in my eyes, ju-jitsu is self-defence and that's all I wanted to learn.

From the age of 5 I used to do Irish Dancing till eventually Ju-jitsu started to take over and become more important. Although my feet still occasionally start to tap away to any Riverdance music!!!!

I am going to guess that I was nervous, as I was going from doing such a girly hobby (dancing) in to what I thought was a manly and brutal fighting scene. Which I must say it isn't ladies!!!! I do remember that myself and Sensie Ian did have a competition in doing the splits and I'm delighted to say I won, not that I could do them now!!

To be honest, when Sensie Ian told me to, haha!!

It was to an extent but when once you get yourself in that routine of training pretty much every night you start to realise that you've been preparing yourself for this from the first time you stepped on to the mat. Passion and hard work will always help to pull you through, even when your body is fighting against you. Another big help... Rule 5!!!

A beginning to a journey that will never truly end.

I've used a couple of locks here and there, mainly against bullies but nothing I would call serious. To be fair, if chocolate doesn't solve the issue then we have a problem!!!

I do! I enjoy them and I am not going to lie, I love to win. I have competed in many countries over the past few years and it has really opened my eyes and my filled my passport, which is never a bad thing.

I suppose it has been nothing but positive for me, it's become a way of life for me and I feel proud to say that I am part of Wakarishin. Knowing that I can pass on what I have learnt and I still have my own goals to strive for makes me happy. Although my Sensie did become my stepdad so make of thatwhat you will!!

For me there are too many advantages to note down, maybe you should jump on the mat and tell me yourself…

Have fun!! And if you're scared or nervous talk to us... What the worst that we could do.